First published by Wen-Shin Publishing House in April 1965, this collection of short stories contains nine pieces that include "Candle Wick", "Some Feelings", "Candle", "A Pleated Skirt with Golden Carp on It", "Qiong Jun", "Our Dad", "Want Some Cold Water?", "Xie Ke Huang", and "A Belated Sunny Day". Hai-yin was proficient in depicting women from the old times, showing in her works great sympathy with females who suffered from the irrationalities of an outmoded marriage system . She also paid attention to issues in real life, devoting many of her paragraphs to marriages between mainland Chinese and local Taiwanese.
（Quoted from Listening to the Sea beyond the Woods: an Exhibition of the Lin Hai-ying Archives, edited by Fen Te-ping, published by the National Museum of Taiwan Literature）
Other editions:
Taipei: Wen-Shin Bookstore, 1963
Taipei: Belles-Lettres Publishing House, 1981
Taipei: Belles-Lettres Publishing House, 1988 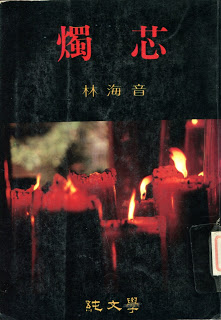